grobakhysteria.or.id – It took two weeks for me to contemplate after finishing the art project in one of kampong in Semarang. The kampong is Bustaman. The name was taken from Kyai Kertoboso Bustam or Raden Saleh great grandfather.(1)

Along with the other artists and Bustaman residents, we tried to turn a public space into an exhibition space. Before working to make the artworks, we learned and gathered all the items and data about the kampong and made the concept. As for me, I decided to ask the children in Bustaman to create their own playground. In the process, I was working with more than 50 children with the average age between 3 – 12 years old.

The curator gave a month for the artists to know the residents closer. Firstly, we started by observing the kampong. Through the observing we knew that there is a mosque in the middle of the area and the old toilet made by the Dutch during colonial era. These toilets had been remade, by involving professional architect from two NGOs, Borda and Pangrukti Luhur, and supported by Central Java Government, Semarang government., and Borda (posisinya rancu). Nowadays these buildings are used by more than 300 people in Bustaman, Pekojan, Bustaman Gedong and Gedongmulyo. Sometimes, started in the afternoon, children are playing near these buildings.

The process began when I met Dinda, a 9-years old girl. She likes to tell stories. Dinda help me bring the other children in the workshop that I conducted.  I met the other children with the same age like Dinda. There were Fani, Nisa, Nafila, Viola, and little Nayla, and the boys like Adit, Bima, Rasya, Andi, and Edo. The first workshop was drawing. We gathered in the hall that was built in the top of toilet buildings. The hall usually used as a place to recite the Koran, to play Play Station, and sometimes to smoke furtively. I brought equipment such as crayons, colored pencils, color pens and papers, then I shared it with the children. The first workshop was not easy as I expected. Their enthusiasm led children act more aggressive and they tried to control each other by screaming or threatening others with a broom. In the middle of the process, two until three children were crying because they didn’t want to share the drawing equipment or team up with the smaller one. Although it was hard, but finally we made the day. The children were drawing their dream house, and the papers that I gave before were full of lines and colors.

When I asked the children to draw a house, their response was interesting. They confused on what kind of house that they should draw: is it like their own house Bustaman or a house like an example that their teacher gave at school? I did remember that when I was a child, my teacher taught me to draw a house like this: a building with a roof, two windows, two doors at the center, and a yard with trees and flowers. I thought this concept of a house became an ideal house for the children. After 14 years, I still saw this kind of ideal house in their drawing. Does the fault belong to the teacher or our educational program? I discussed this problem with Bayu Tambeng, a friend of mine and one of the artists in Bustaman Project. He said that sometimes the adults forget that children have their own imagination. The adults always tried to impose their ideal and blamed the children if they could not draw a house like expectation. Perhaps this problem should be communicated between teachers, students, and stakeholders.

Back to the program, I conducted workshop on drawing and coloring for several days. This workshop started after the children finishing their nap and bath. We usually helped each other to do homework at 7 p.m. After that, we went back to our home at 8 p.m. During the workshop, we used to sing our favourite song, “Laba-laba Kecil” (The Little Spider). Here are the lyrics:

Everyone like to sing “Syuuuu…” because we usually shake our hand to represent how the little spider is slipping. We smiled and laughed. The second song that we sang was:

I remember how the boys were singing loudly. Some of them were singing while carrying their younger brother or sister. For several days, we used the building. Day by day, children who became the participants were getting multiply.

There were several children caught my attention. The first was Triana who had a homework given by her teacher in kindergarten. She had to draw an umbrella’s curve. I remember how funny she was, carefully made the curve and played with her pencil. When she finished it, I gave her 100 points because she successfully made it. The second one was Adit. He was still in kindergarten. When I asked what will he be when he is adult, he answered, “I want to be a soldier“. I suddenly burst to tears because he mispronounced the ‘soldier’. The other children also laughed him because he was so funny. During the workshop, I saw that Adit like to roll over or to sing dangdut. When I told the other that he likes instant noodle, he just ran and laughed. He seemed naughty, but for me, he was the most excited one because he voluntary helped the others about technique that he just learned. He always asked for a large piece of paper. He likes to spill the ink in the paper, then he rubs it until the colors became irregular. When I asked him what did he draw, he answered, “a ghost”.

This is too sentimental for me to write all my experiences within two weeks of the workshop. I remember when Fani shyly asked me to sing the little spider. I whispered in her ears the lyric, and then she practice it by singing it with me . She learned by heart while helped her mother sell iced-tea. Not only had a will to learn all the materials, but Nisa also lead her friends to dance in the closing exhibition. Nisa and her friends were so beautiful that night. The used lace headband and modified skirt and it made them look so cute.

In this process I learned many things. I knew that when many people lived in small area, it will raise a lot of tensions. Children in this kampong forced to be mature. I don’t want to judge others if some children were misbehave, but I knew that children had a pretentious to follow what their parents did. Reality made the children knew what they shouldn’t know. They tried to catch their parents attention by following dumang dance or misbehave. As for example, there was Farhan, an elementary student who tried to smoke when the workshop ended. I asked him the reason he smoked cigarettes. He just laughed and said that smoking is not a sinful thing to do. After the workshop was done, Farhan usually accompanied me and told me stories until the dead of the night. Its just kept me thinking and sad.

Other story that I want to tell here is the way I and children were teams up to make some masks. It happened after a week in the workshop. I asked the children what is their favorite superhero, then I drew it. There was one child asked me to draw Mr. Bean. The girls were asking me to make fairies masks. There was a child also asked me to draw unfamiliar robot called Adudu. We made 33 masks. We were so busy that day. I brought wasted papers, the children made the collage, and then clung and painted it. Everybody was happy and we laughed all day. The next day, we patched the masks in balloons. After it finished, the children brought the masks around and put their name on it. I did record our process. I gathered 30 children in the alley, then we sing The Little Spider together loudly. I was so happy, but sad. We hugged each other and then all the bad feelings suddenly gone.

Besides workshop, I made artworks as well. The children were helping me submit their works and we gathered toys sold by rounds-man in Bustaman. The rounds-man brought plastics full of toys from 500 – 2K IDR. I used to see some of the toys and some were not familiar for me. We put all of the toys in a table covered with thick sheet about four meters. Sometimes the children were playing with this sheet, made it into brides gown or as a base to roll over.

For me, it was not easy to keep this relationship. I was so emotional and I could not imagine if someday I become a teacher. One day, there were children blamed me because they thought I was picky, favoring some children only. This made me sad. Besides that, I learned several things about children. I could imagine if I were their parents, sister, or friend. It needs a lot of energies to learn and to play with them. Knowing that children will getting excited if there was an adult prohibited something, I thought it needs a lot of negotiations (maksudnya?). I knew that this process will be useful for me someday. But one thing for sure, during this process, we share our knowledge among myself, children, and the parents. We knew that we can hope through the art to create a harmony.

The exhibition is over. Remembering how myself became closer with the children and the parents truly made me sad. This was special for me. Until now, I am still wondering how arts can face the public. Not only the form, but we need to expand our view about humanity and arts as well. In my honest opinion, arts should not be too abstract, but it should transform and get to the people heart, into adults and children as well. Through arts appreciation and humanity, I believe that the conflicts will reduce.

Finally, for Bustamans, thank you for everything that I learned .

View all articles by grobakhysteria 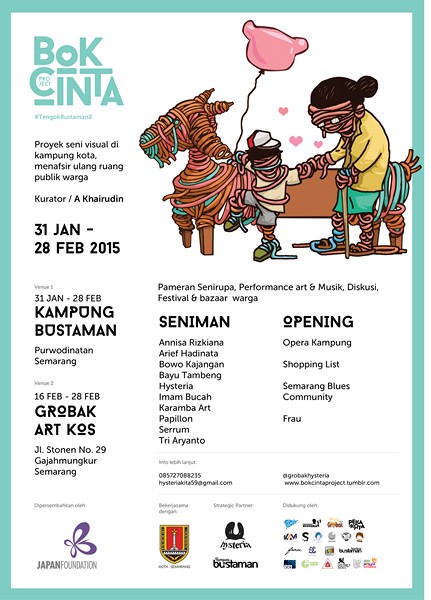 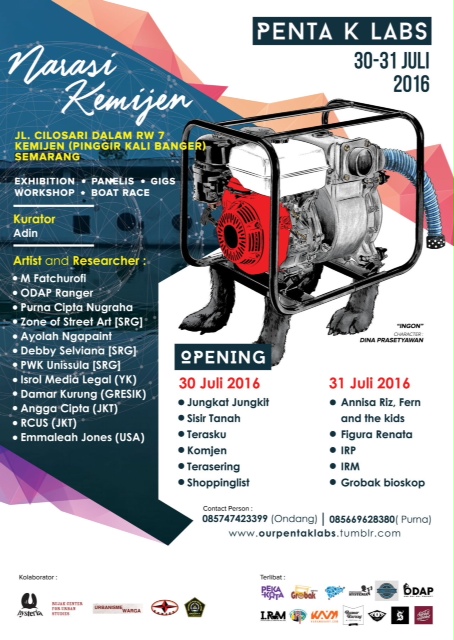 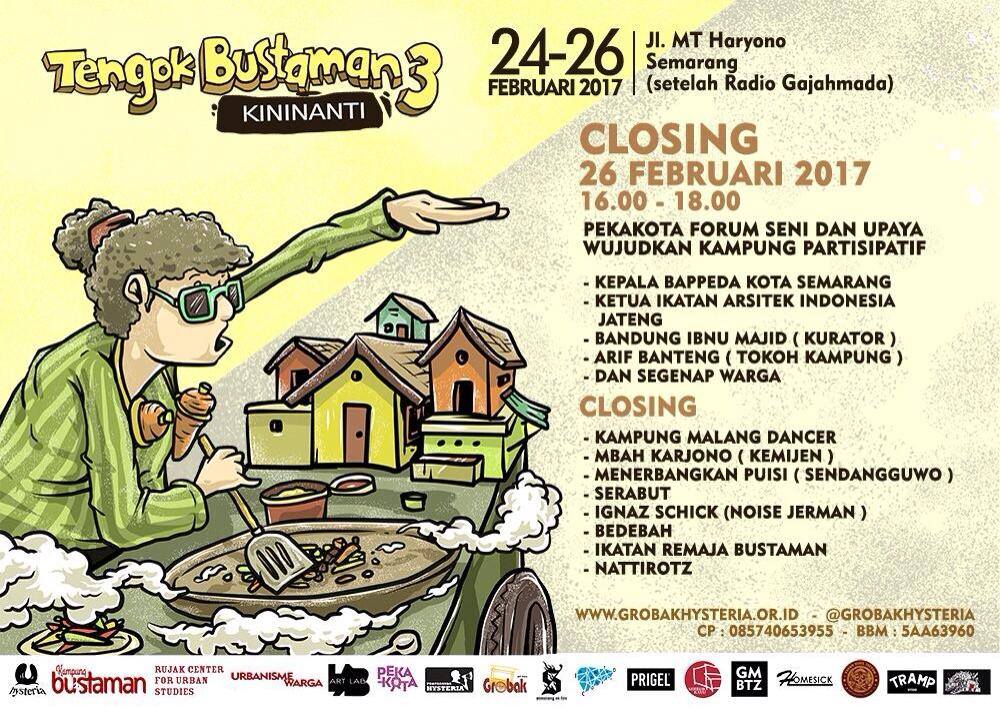